Graduated from the American University of Beirut as Medical Doctor in 1988 and as Orthopedic surgeon in 1994. Performed his residency during the Lebanese war where he gained his expertise in the surgical treatment of all types of injuries.

During his private practice in Lebanon, he spent more than 25 years managing reconstructive orthopedic surgery including Knee and hip joint arthroscopies and replacement, his interest was in performing minimal incision for major surgeries allowing quicker recovery.

He also gained huge experience in leg lengthening, complex fractures fixation and treatment of congenital hip and lower extremity deformities in children. He is also an expert in managing osteoporosis and monitoring of children musculoskeletal growth.

Expertise in the surgical treatment of all types of injuries, specialise in general orthopaedics including hand surgery, arthroscopic surgery, and joint replacement, trained for upper extremity surgery and paediatric orthopaedics.

Paediatric orthopaedics is the branch of medicine that deals with injuries and musculoskeletal conditions in children and teens. It is also sometimes known as paediatric orthopaedic surgery. The most common issues that children experience are foot deformities, gait disturbances, and hip dysplasia, among others. These issues can be hereditary, congenital, or acquired. 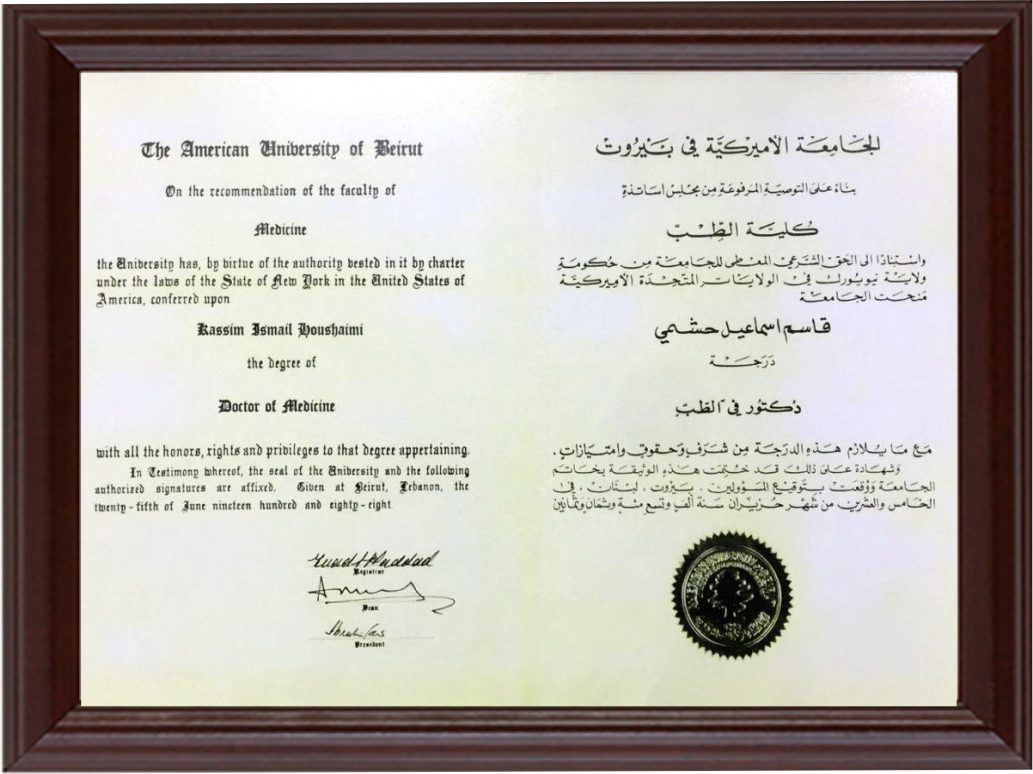 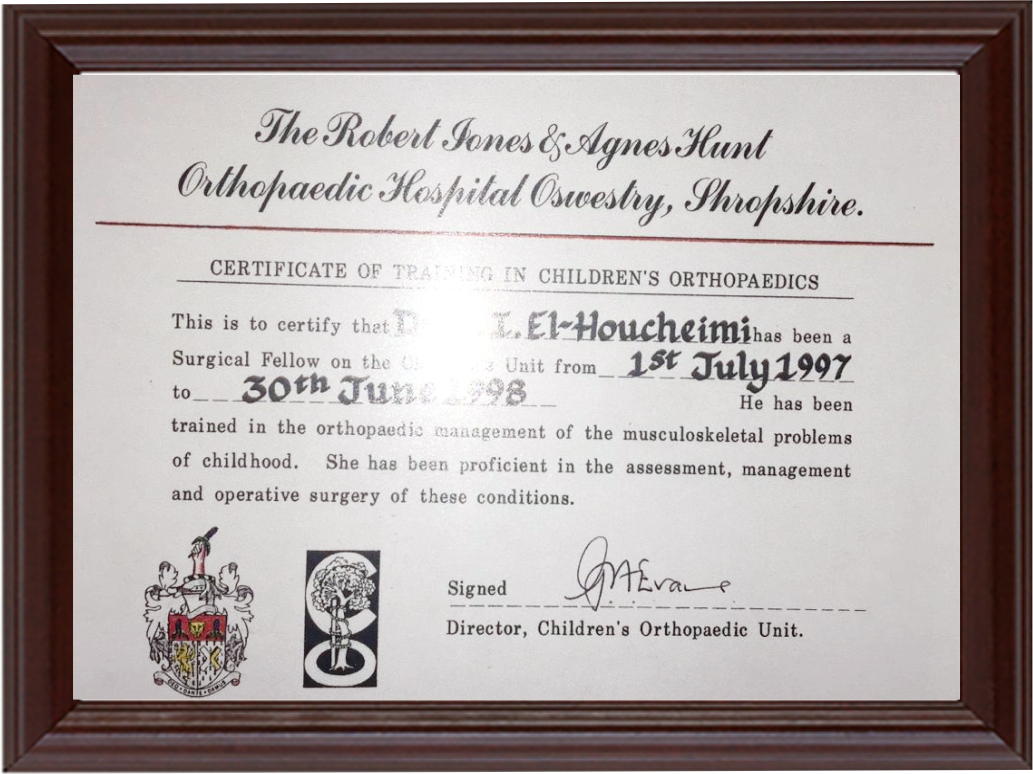 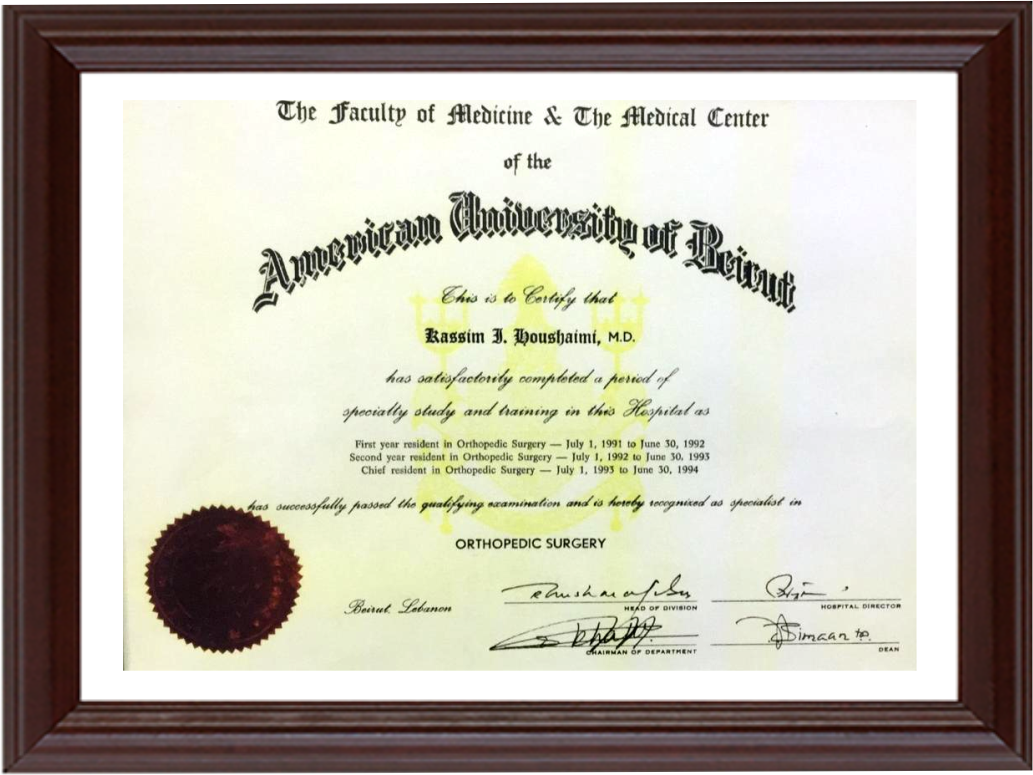 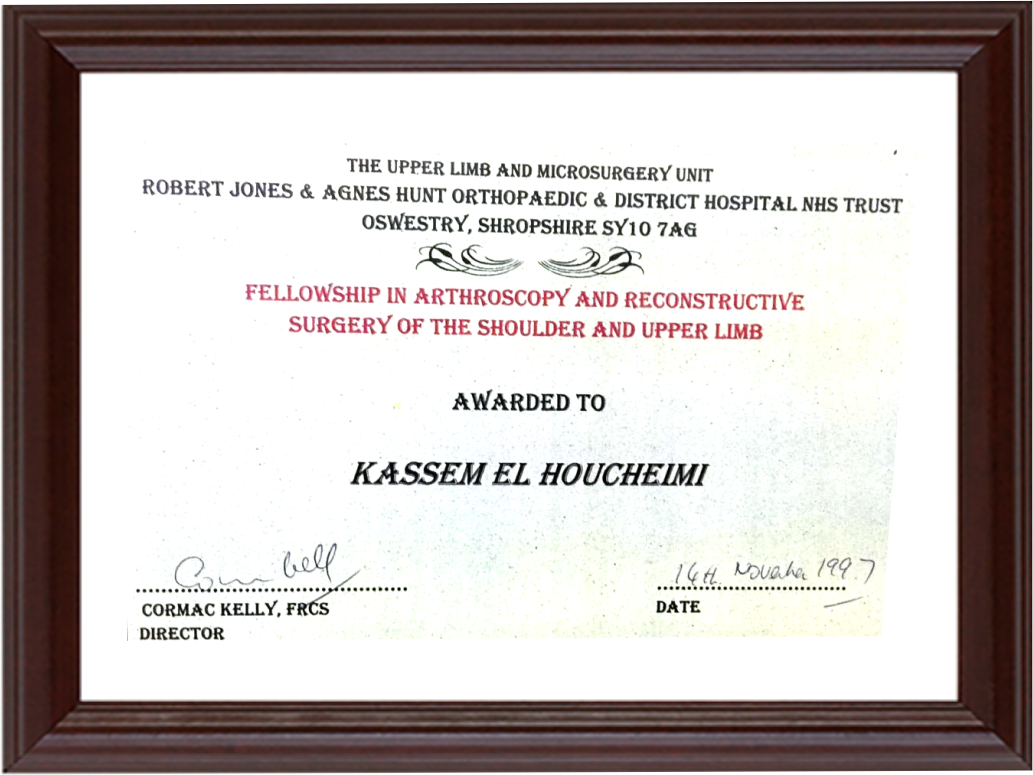 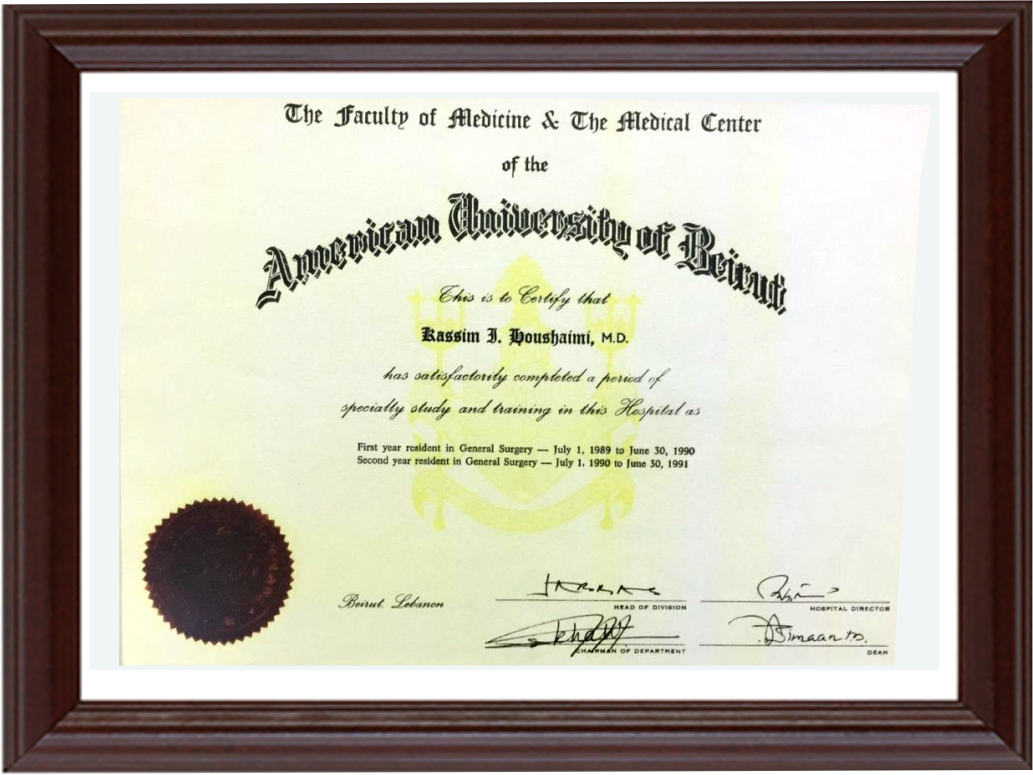 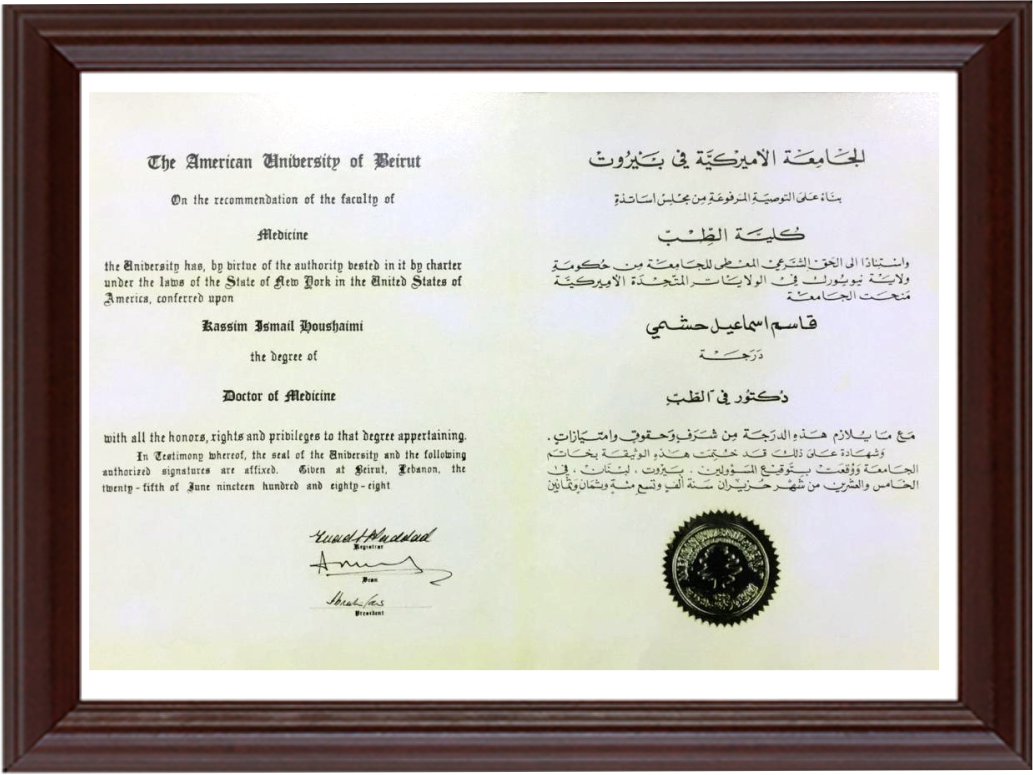 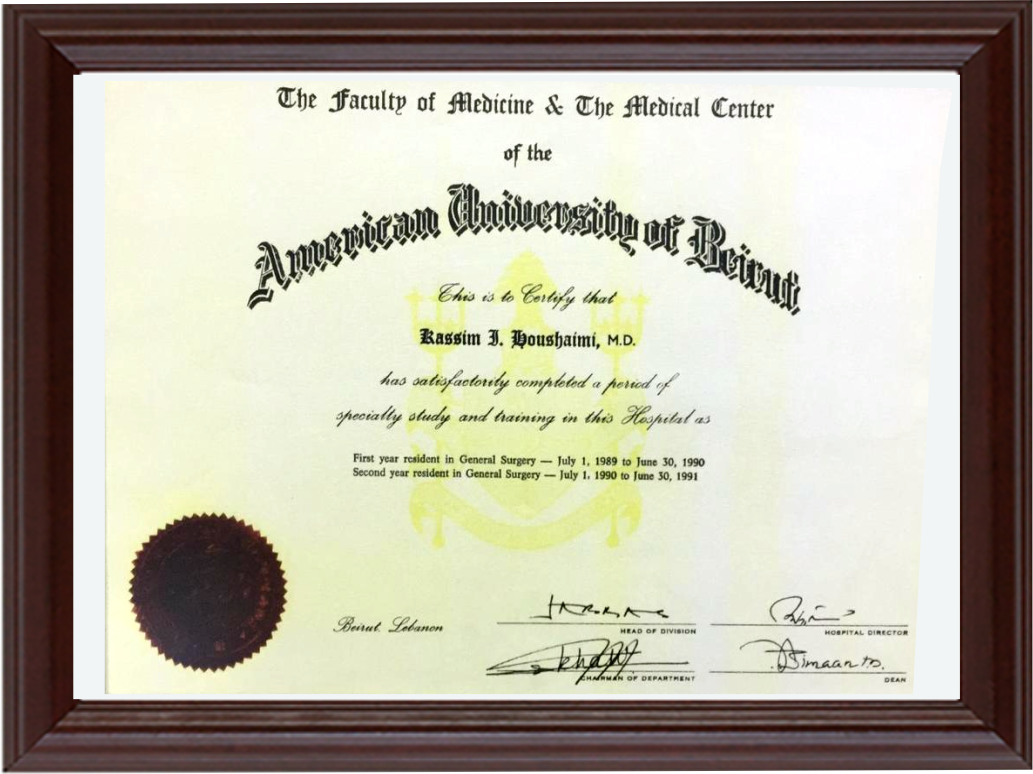 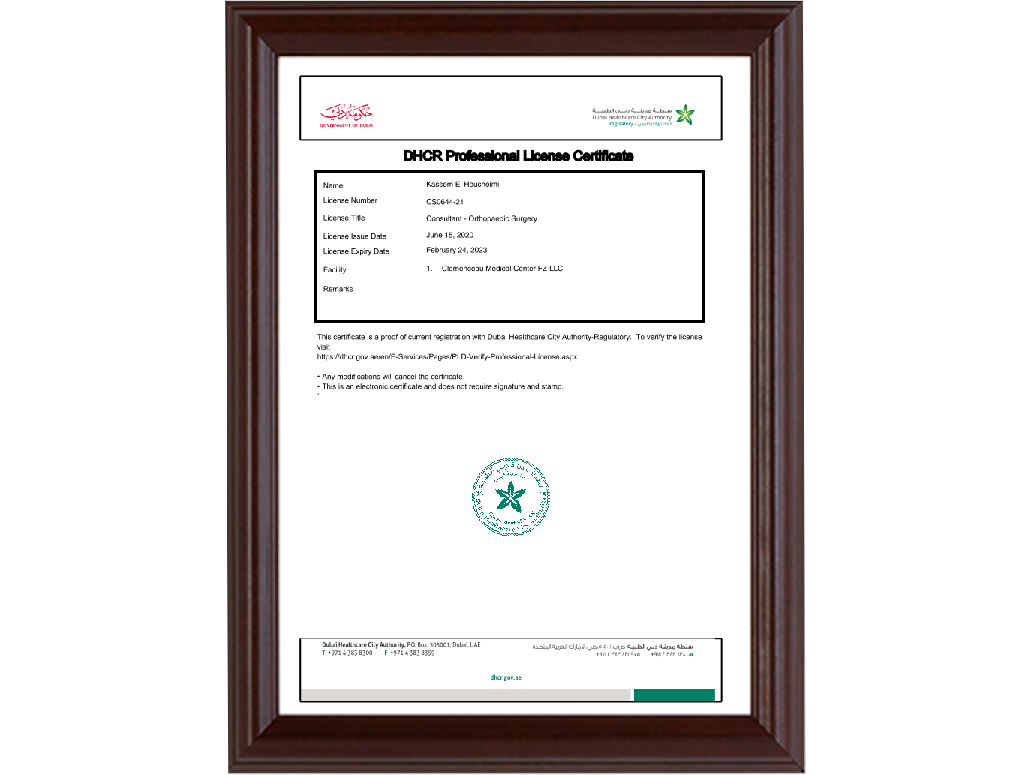 Maroun Zeidan
Verified
Dr Kassem is one of the best orthopedic in Dubai! Very professional, super calm and experienced! He helped me through my pain and was very helpful! I highly recommend him to everyone needing an orthopedic in Dub as i

Wael Dalati
Verified
We had a visit to Dr Kassem for my wife back pain and he was very thorough in his examination and explained in details the process of her recovery.

Reza Yazdi
Verified
My mom broke her shoulder falling down, the ambulance took us to Clemenceau Hospital in Dubai. From the ER to the very professional and talented Dr. Kassem El Houcheimi we had an excellent medical care, the hospital is nice and clean, rooms are pleasent and very comfy. I also strongly recommend Dr. El Houcheimi for any orthopedic issues, specially the upper body. He has a great work experience, always available for his patients, make them at ease and confident before and after the surgery. Thank You Doctor!🙏🙏🙏🙏

Hadi Bachir
Verified
After visiting different doctors who immediately said i needed surgery, Dr Kassem was able to heal my elbow without a surgery. Thanks

Ghina Kadri
Verified
Dr. Kassem El Houcheimi is an highly professional orthopaedic surgeon He is very attentive and has always provided the correct advice and treatment. He operated both my right and left wrists The surgery went very well and the result impeccable as I have regained total use of both arms fully after enduring months of pain and medication .(My only regret is not going ahead with the surgery before) My experience has been very satisfying and would always only go to him and recommend all my friends and family to do so Dr Kassem is also very humble and helpful making himself available 24/7 Thank you Doctor Regards, Ghina

Marwan Takkoush
Verified
My experience in three words: accuracy, fast and humble. Dr. Kassem El Houcheimi, best orthopaedic in Dubai if not the whole region. Accuracy in ruling out options by asking many questions. Fast service yet you have all the time to ask any question. Humble person, you can feel it in the way he talks and care he shows to his patients. Dr. Houcheimi, we are lucky having you in the UAE, Dubai. I highly recommend Dr Houcheimi to all family and friends who are seeking orthopaedic treatment.

Sarah F
Verified
I felt a stiffness and tightness in my lower back and came to visit Dr Kassem. From the first visit he figured that I had scoliosis-related symptom. Thanks to him I now visit for regular observation, and practice core-strengthening exercises to strengthen my back to improve flexibility

Hassan Yakan
Verified
Thank you Dr. Kassem for all the support during this month. My parents and myself felt so comfortable from the night I broke my arm, and got it fixed it in the ER mid night, until today, the day I removed the cast. With all Respect and Love, Adam Yakan

Contact me through call, WhatsApp or fill in the form to book an appointment with me.